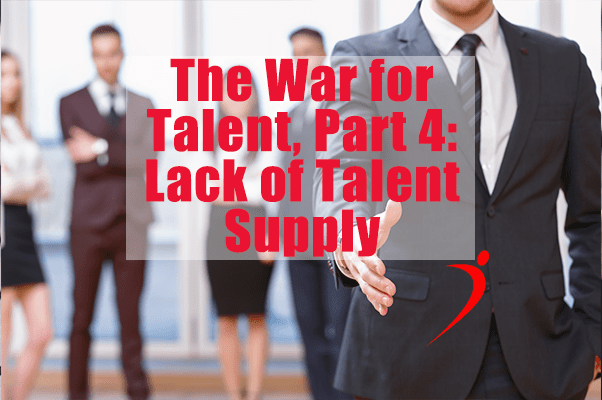 In this eight-part series, we will take a close look at eight different factors that will affect your company’s ability to attract and retain top talent in the marketplace.

Previously in this series, we’ve considered company culture, below-market compensation, and an ineffective hiring process as factors that may inhibit your ability to fill open positions with quality people. In this post, we’ll shift our attention to an external factor that may not always be within your control: talent supply.

Back in February of this year, entrepreneurs everywhere got a kick out of Boston resident Kyle Waring’s bright idea to make a profit off the record-breaking snowfall in his city. Waring decided to do his part to dig the city out from under its 100+ inches of snow by packaging the fluffy stuff up and selling it online. Floridians and other warm-weather dwellers could purchase coolers full of snow and have them shipped overnight for an instant snowball-fight-in-a-box. As the rest of the country looked on in admiration, Waring capitalized handsomely on a fundamental economic concept: the law of supply and demand.

Waring’s idea was a roaring success that garnered national attention partly because of its tongue-in-cheek audacity and partly because Waring did what any successful business must do. He identified a niche and filled it. His only caveat? He wouldn’t sell snow to anyone in Massachusetts.

What does selling snow have to do with hiring good people? Successful hiring relies on one of the same principles that successful marketing does: supply and demand. Let’s look at three takeaways from Waring’s story that we can apply to the hiring industry:

Staying in Budget When Competition is Fierce

If your budget doesn’t allow for a top tier salary, there are other options you can consider to attract the talent you need. For example, you could offer a signing bonus in exchange for a two-year commitment, lease a company car for the employee, or offer another incentive. It can also be helpful to take a second look at your job requirements. If you can train for some qualifications on the job or consider fewer years of experience, you may be able to hire a less experienced person at a lower compensation rate. This option may also enlarge the pool of potential candidates you can draw from, giving you more options and better opportunities to find a good cultural fit.

Kyle Waring’s innovation gave us all a chuckle, but the war for talent is no laughing matter. Attracting and retaining top talent has direct bearing on your business’s ability to compete in the marketplace. While supply for certain positions may be limited, above-market compensation and stellar benefits can help you win the attention of the best candidates.